Gazing into the future of transport

Autonomous vehicles jostled for attention with flying cars at the Cologne event.

UK Autodrive jostled for attention with flying cars and hyperloops this week as the German city of Cologne hosted a two-day conference on the Future of Transportation.

Billed by organisers as an “exchange of ideas” across the various segments of transportation, the event was spread across eight specific “streams” – ranging from the legal and technical issues facing autonomous vehicles to environmental sustainability, zero-fatality transport targets and infrastructure and funding challenges.

UK Autodrive was represented at the conference by no fewer than four of its consortium members, with Ford, Arup, Gowling WLG and AXA all providing speakers over the course of the two days.

Arup Director Tony Marshall was first up with a presentation on “Rethinking Roads” that included the main project aims of UK Autodrive, but also went further to speculate on the massive transformation that connected and autonomous vehicles could bring to roads and cities in particular, for example by reducing the amount of space currently required just for the parking of cars. 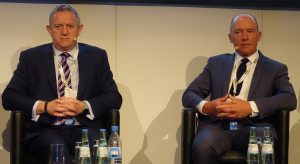 Kicking off the talk, Stuart cited six main reasons that autonomous vehicles pose such a challenge for regulators. These included the speed at which innovation is taking place, as well as the aggressiveness of some of the innovators in wanting to bring their products to market. The pervasive nature of the change involved was another factor, with Stuart pointing out that regulators tend to operate in distinct areas – whereas autonomous vehicles are likely to be “disruptive across the whole landscape”.

Picking up on the challenge of an over-aggressive rush to market, David Williams said Axa welcomed autonomous vehicles but was “very concerned” about the marketing of vehicles with “level 3” autonomy – where cars are able to carry out some of the driving functions, but ultimate responsibility is still down to the human sat behind the wheel.

“We think there needs to be tighter rules in regard to the marketing and training provided by the people that are selling [cars with level 3 autonomy],” Williams said. “[The vehicles] are being misrepresented because they are not fully autonomous, and there needs to be some regulation to make sure you’re still involved as a driver, although you could say that calls into question the benefit of even having level 3 cars.”

Ford, whose strategy is also to bypass level 3 autonomy and focus instead on producing cars at level 4 (where the vehicle can operate within a designated geographical area with no human driver involvement required), were the next UK Autodrive partner to take the podium – with their Automated Driving Europe Supervisor Christian Ress providing an update on the company’s developments in regard to connected cars.

From Nuneaton to Cologne: a video of June’s UK Autodrive technology demonstration was shown at the Future of Transportation conference.

Ress ran through four of the seven connected car features that Ford is collaboratively trialling alongside Jaguar Land Rover and Tata Motors European Technical Centre within the UK Autodrive programme, and explained how features such as emergency brake warnings and cars that can connect to traffic lights could bring major benefits in terms of road safety, reduction of congestion and improvements for the environment.

A video showing footage from last month’s successful UK Autodrive technology demonstration at the HORIBA MIRA Proving Ground in Nuneaton rounded off Ress’s talk – showing that while much of the “Future of Transportation” event involved gazing decades into the future, at least some of the technology under discussion is already much closer to becoming mainstream reality.

For more on the Future of Transportation world conference, please see the event website.